The Low-Down on Nina Dunn

Nina was born and raised in Roxboro, NC. She is a 2002 graduate of The University of North Carolina at Chapel Hill with a B.A. in Exercise & Sport Science. Growing up, Nina participated in a variety of sports; however, running was not one of them. When she was 31, she was inspired to try her hand at a 5K. She signed up, trained, crossed the finish and fell in love with the sport. Through running, Nina found confidence and mental strength that has carried over into her everyday life. What she hopes to accomplish as a coach is to remind people that they are never too old to learn a new skill, and it is never too late to become a better version of themselves. Outside of endurance events, Nina loves dogs, music, and stand-up comedy.

Top Songs on her Playlist:

Anything Hip-Hop or R&B…. I’m not from the streets, but I pretend to be.

My defining moment, technically, occurred before my career even existed! It happened in 2011 while I was picking up discarded cups as an aid station volunteer during the Quintiles/Wrightsville Beach Marathon. It was my first introduction to Without Limits and my first exposure to an endurance event of any kind. Armed with trash bags and covered in HEED, I remember little thoughts popping into my mind as I watched the athletes pass me by. Are they crazy? How long have they been running? This is for fun? Were his nipples bleeding? And then it happened….the last question that I ever thought I would ask as a non-runner….I wonder if I can do this? I went home, added 5K to the bucket list and made a plan. Twelve months later at the age of 32, I ran the 2012 Quintiles/WB Half-Marathon, and twelve months after that, I ran the 2013 Quintiles/WB Marathon. Since that moment, running has been a part of my daily life, and now I am fortunate enough to say that it is a part of my career!

Best Part About Being A Without Limits Coach

What I enjoy most about coaching is witnessing the growth each athlete displays from one practice to the next. To see the doubt that is present on day 1 leave the mind after a hard work out on day 10 is truly a magical moment. Cheering someone across the finish line is fun, but to be a part of an individual’s entire goal setting process is an incredible experience. 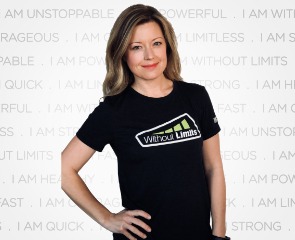