The Low-Down on Jon

Jon grew up in Raleigh and was first introduced to swimming through his neighborhood summer league team, Lake Park. He swam year-round for YOTA, and throughout high school helped coach the neighborhood team. After high school Jon attended and swam for UNCW from 2016-2020, where he studied Business Administration and was a captain his junior and senior seasons. During that time he began coaching in the area for CFAC and then WOW. Following undergrad, he graduate assisted for UNCW Swim + Dive during the 2020-2021 season, getting his MAT in PE and Health in the process.

What are your guilty pleasures?

What are your top songs on your playlist?

Anything from Jerry Jeff Walker to J. Cole, as long as I can vibe with it in some way.

What are your best qualities you admire in your athletes?

Throughout swim coaching career, Jon appreciates those swimmers who act like they want to be there. Listening and making adjustments, and questioning or providing feedback on their training.

What has been your defining moment in your career so far?

Injuring my knee senior year of High School and going from not walking for 4 months to still being able to compete for UNCW.  Another, coaching swimmers throughout college that ended up swimming in college.

What has been the best part of being part of Without Limits?

Meeting so many awesome people in another athletic community in town that truly care about improving and staying fit. Fires me up. 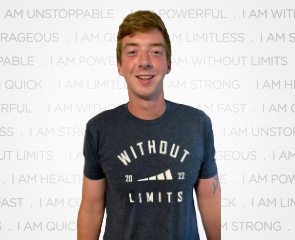